Last year I went to a reading of letters written by my great-great-grandfather's family during the 1st World War.  Although they were not particularly wealthy or famous, it was nevertheless fascinating to hear about what they were all doing in 1915.  It was also quite humbling, in that they, along with millions of others across Britain and further afield, did great things - leaving home at a young age to fight in a foreign country, looking after the wounded both in the field and closer to home, and working in government at a very difficult time for the country.  It was also fascinating to meet other members of my extended family, some of whom I had never met before.  Despite not having met them, I did feel as though there was a shared identity, that somehow the experiences of the family from 100 years ago had somehow been transmitted down all branches of the family tree.

Around the same time last year, I went to the funeral of Alexei Likhtman, a maths professor at Reading who tragically died in a hiking accident.  Hearing some of his closest colleagues and students speak at the funeral really brought it home to me how strong the bonds between academic colleagues are.  Several of them described the relationship as being like family, and this analogy is especially apt for the relationship between a PhD supervisor and their student.

So all of this has made me more curious to find out more about my academic family.  I have known for a while that my supervisor's supervisor was Peter Green, quite a prominent statistician, but until recently I hadn't traced my academic lineage back any further.  The Mathematics Genealogy Project made it easy for me to find out more.  The first thing I found out was that Peter Green's line goes all the way back to Laplace through Poisson and Dirichlet.  Among other things, Laplace discovered Bayes' theorem (independently of Thomas Bayes), and applied it to problems in astronomy, as well as making significant contributions to probability theory.

By looking up several other prominent statisticians, I developed the family tree shown below.  It is by no means complete - Laplace has around 88,000 descendents recorded on the Mathematics Genealogy Project!  Nevertheless is gives an interesting insight into the relationships between a few of today's top statisticians.

As well as the Laplace family, the Newton family is also quite interesting, although somewhat more exclusive at a mere 12,200 recorded descendents.  There is a line directly from Newton to Fisher, as well as to Galton and Pearson.  And, every person on those lines studied / researched at the University of Cambridge.  This is quite different from the Laplace family who seem to have moved around a lot more. In the 20th century, the Newton family finally managed to break free from the Cambridge bubble.  The descendents of Fisher, Pearson and Galton are spread across the UK, and across the USA, and include Andrew Gelman (from the Galton branch).

Similarly to finding out about my biological family, I have found it quite fascinating and humbling to find out more about my academic family - where I come from and who I am related to.  It is also tantalizing in the sense that the there is so much information not recorded in the Mathematics Genealogy Project.   Laplace is only recorded as having one student and Newton only two - surely they must have had direct influence on a much greater number of people!?  And there also no information about post-PhD collaborations.  For example, on Herbert Scarf's wikipedia page, it says that he travelled between Bell Labs and Princeton every day in the summer of 1953 with John Tukey.  So does that make Tukey an adopted member of the Laplace family, and a great-great-great Uncle of me?  It seems we are all more closely related than we might think. 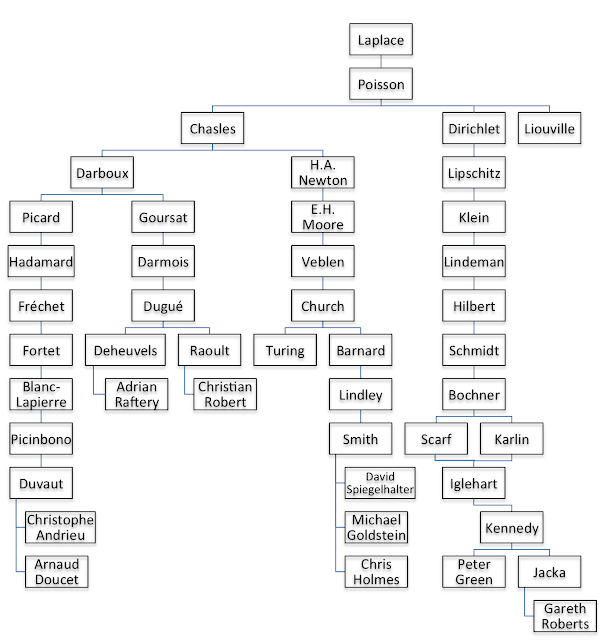